Photo Focus – This Changes Everything, How to Accurately Meter Light-Flash-Color from Your Smartphone

Photo Focus – This Changes Everything, How to Accurately Meter Light-Flash-Color from Your Smartphone

This Changes Everything, How to Accurately Meter Light-Flash-Color from Your Smartphone

The light meter in our camera’s only read light bouncing off the subject. They can’t read color or flash (unless it’s from its own speedlight.) They also can’t read light falling on the subject also know as “incident” measurement. Incident flash meters run from a low end of $200.00 to $750.00 for a pro version. Color meters are really pricey at $1700.00. Which brings me to a new incident meter that connects to iOS & Android smartphones via bluetooth. 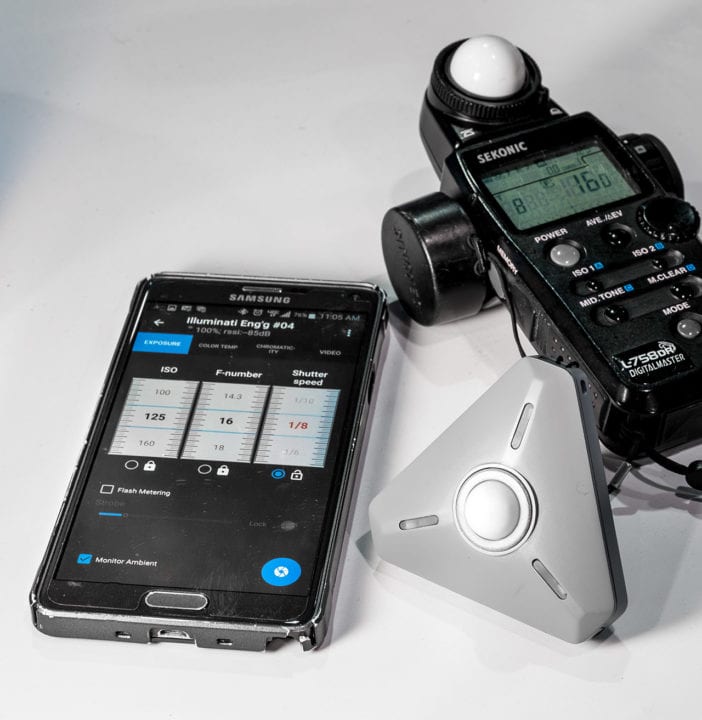 Illuminati Instruments introduced a compact incident type light meter that reads ambient (a.k.a. natural) light, flash and the color of both at the National Association of Broadcasters (NAB) show in Las Vegas this week. It uses our smartphones to display results. The meter portion (the gray triangle) is small, thin, very light and pocket sized. Its small form factor makes it easy to have with us everywhere we take our smartphones. The unit is powered by two AAA batteries that are available practically everywhere, unlike the batteries some more exotic meters use. As you can see both meters provide the same reading. Alternative combinations of ISO, aperture and shutter speed are made by moving the appropriate scale with your finger. The others change automatically. A separate screen displays color. Ambient and flash combinations are also shown. The meter will be available in the fall of this year (2017) at an estimated price of…

You are so not going to believe this price: $300.00. Yup. Three hundred bucks for an ambient, flash and color temperature meter that connects wirelessly to your phone. Wait. There’s more.

There’s a Kickstarter campaign that saves a third of the cost by opting in to support this project. For $200.00 (plus 9.00 shipping,) the first available Illuminati meters will go those who support the Kickstarter. Here’s a link: Kickstarter Illuminati Project. (Editor’s Note: Be sure to read the general disclaimer from Kickstarter regarding risk and Kickstarter projects.)

I had the opportunity to use the Illuminati meter during a class I taught at NAB on lighting video interviews as portraits. Over a hundred attendees watched as the meter gave me the exposure info for the camera. The main lights were tungsten white balance or 3200ºK. The hair light I had to work with was a color adjustable LED. I had the model hold the Illuminati aimed at the LED while I dialed in the color. All I had to do was watch the color temperature scale until it read 3200ºK. Perfect, easy and simple. I’ve already joined the Kickstarter and can hardly wait until my Illuminati arrives.

Mike Okincha, President of Illuminati Instruments Corporation, has been involved in the design of digital cameras, sensor and measurement devices. He has had technical, management and marketing positions with prominent companies, Agilent, Flextronics, Omnivision and Foveon. He founded Peripheral Vision in 2010 to consult and design. PV also develops automated camera testing systems.

Mike knows photography. Personally, I am indebted to Mike’s skill in camera design. Back in the early 2000’s, product photography was practical because the subjects were still during the 45 seconds it took to make the three separate shots needed for a digital color photograph.

Mike designed one of the early DSLR cameras, the Sigma SD-9 using Foveon’s X3F sensor. I made the cover photograph for my first book, “Photoshop CS: The Art of Photographing Women” with it. Most of the rest of the book was done with another camera he worked on, the Foveon Studio Camera. It was a 3 sensor camera that was the first to allow full-color digital portrait photography.

Rudy Guttosch worked for Hasselblad, the legendary maker of professional medium format film cameras, where he worked to develop that company’s digital imagers. He went to work for Foveon, now Sigma’s wholly owned digital sensor maker, to develop the Foveon Studio Camera and on to work on the X3F sensor.

Tom Walker (not pictured) is a product designer based in Asia whose over a quarter of a century of experience brings manufacturing expertise to Illuminati Instruments.

One of the gigantic gaps in making properly exposed photographs is between reflected meters like those in our cameras and the ones that measure the light striking the subject known as incident meters. Reflected meters provide exposures that make bright subjects underexposed and dark ones overexposed. Learning how to compensate for reflected meters’ penchant for turning everything gray is not the easiest thing in the world. Once it’s understood, setting the exposure compensation dial on the camera fixes things. Incident meters can’t be fooled by how much the subject reflects. The light falling on a bright subject is the same as that falling on a dark one. Once the settings for the light falling on a subject is known, the reflectivity of that subject doesn’t matter. Bright subjects and dark ones alike show their true tones.

The downside to an incident meter is it’s one more (expensive) piece of gear to carry. It can be a bit cumbersome to use. The photographer has to walk into the scene, point the dome at the light shining on the subject, take the reading, then return to the camera and enter the meter’s setting. The Illuminati meter is so small and lightweight that a model can easily hold it at the light while the photographer gets the exposure and color values right on the phone. The model can slip the tiny Illuminati out of sight and the photography can begin. Only when the photographer decides to change the light is a new reading needed.

The other thing I love is that the Illuminati will go along on all of my shoots because it’s so small. I always have the meter’s other part, my iPhone, with me. Adding this compact, powerful meter is truly a no-brainer. If you’ve never used an incident meter and are curious, join the Kickstarter. If you have an incident meter but it’s not always with you, do like I did and join the Kickstarter.

By Illuminati Instruments|2020-04-10T10:45:15-07:00May 2nd, 2017|Categories: Press Articles|Comments Off on Photo Focus – This Changes Everything, How to Accurately Meter Light-Flash-Color from Your Smartphone

About the Author: Illuminati Instruments