Scientific meter veteran Illuminati has created a new cine meter that works remotely to save time on set.

At NAB 2017, we were introduced to a new meter from Illuminati, and were so intrigued that we borrowed one for a week to test it out. The Illuminati meter rethinks entirely how we consider measuring the light in a scene. While traditional meters require a filmmaker to wander to various parts of the set or location, reading a variety of light and color values, Illuminati meters are small units that can potentially be left in the scene and read with either your smartphone or your smartwatch from afar. Even more interestingly, they are priced such that you could potentially have many meters in a kit for taking realtime readings through a shoot. 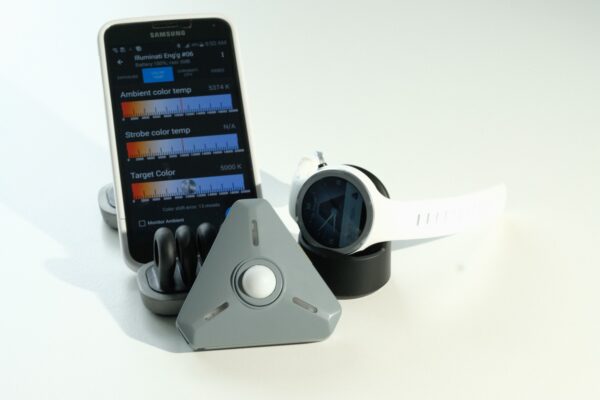 The illuminati meter works with a smartphone app and a smartwatch as well.
Credit: Charles Haine

The illuminati meter measures both light and color values from it’s little sphere, and communicates via Bluetooth back to your smartphone, smartwatch or tablet. The unit itself is designed to be mounted in a variety of ways, with a magnet on the back to make it even easier to clip to a backpack or jacket, and a sturdy 1/4-20 mount. In the kit there is a variety of little mounts and clips to snap on the magnetic back to have it stand up on a table, easy to hold in your hand, or clip on clothing. 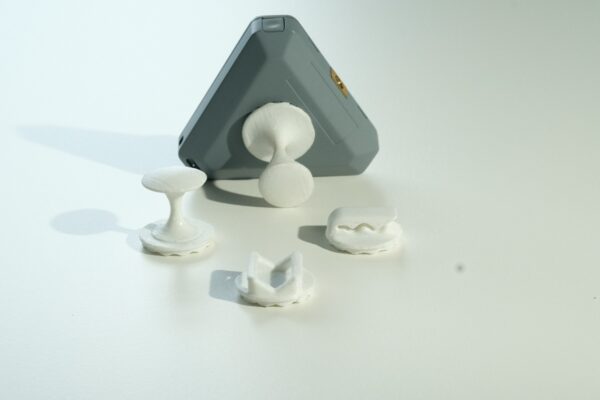 While it’s made of plastic, it feels durable in your hand, and feels like a tool that will survive life on set. Meters in general are delicate items, and you shouldn’t go tossing it off a cliff, but with its automatically retractable sensor sphere, it appears that the unit could even survive accidentally being stepped on from time to time. There is an optional hard case available, which should be good for wet weather, outdoor, and splash situations where you might want to read some measurements underwater. 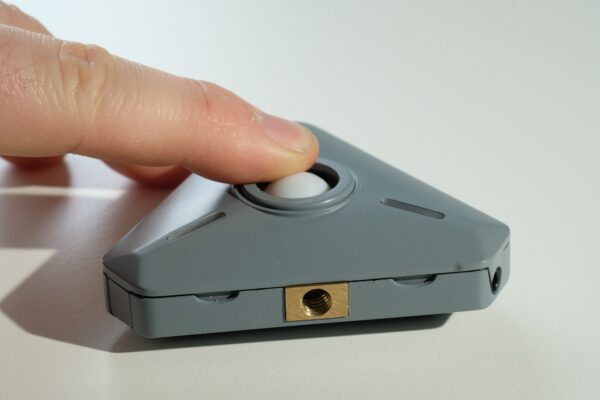 While the triangle shape looks a bit awkward, in practice it was actually quite useful. When hung from a lanyard, the bottom-heaviness was convenient for orientation, and it mounted easily on a light stand or a tripod with the ¼-20 threaded mount. When used with the magnetic accessories, the bottom-heavy nature of the triangle made it easy to set up in a variety of situations. The single on/off button was consistently responsive and the LED lights never left us wondering what mode it was in. 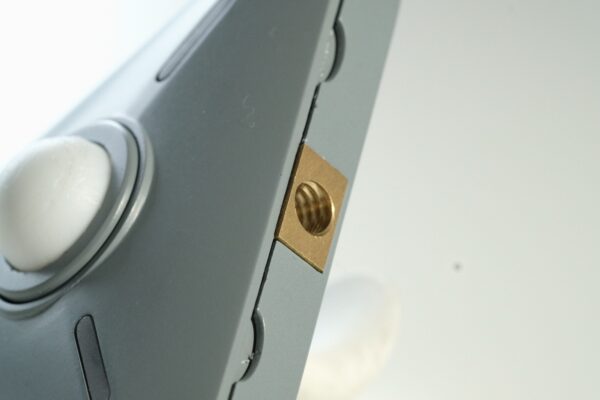 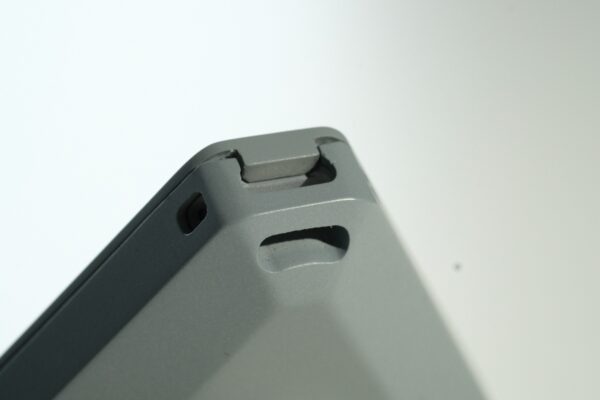 The folks from Illiumnati were very clear that the model we tested was a pre-production unit that hadn’t been finally calibrated, but despite this, we found it to be useable even in its current state. It was around ⅓ of a stop off from our Sekonic light meter, but it was always consistently ⅓ of a stop off. Anyone who has ever owned more than one meter knows that it’s hard to get them to match up perfectly, even with regular calibration from a group who specializes in these things, like Quality Light Metric. It’s not infrequent at the beginning of a job for the DP, gaffer, and best boy electric to all see how their meters match up to one another to make sure that they all know the differences, and ⅓ stop difference is pretty typical. 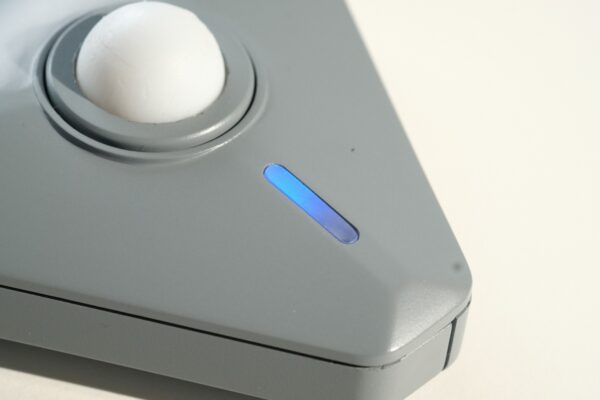 The key is consistency. As long as it always reads the same way, whether over or under, it’s still a useful meter, since you get to know meters over time. You learn their quirks. Our Sekonic is a little brighter in spot than incident; it’s just part of that particular unit, and you get to know it with time. Additionally, this is a pre-pro unit, and it’s entirely possible that the unit will end up aligning perfectly with our Sekonic in it’s release.

This is especially true since what you are really going to be looking for with a meter like the Illuminati isn’t just it’s pure reading, but changes in the reading. For instance, when shooting a day exterior sequence, you could pop an Illuminati out on a light stand just out of frame to read the light falling on your background, to see how far your background might overexpose. On your app, you could then watch to see when your background gets just too hot to hold exposure, requiring you to bring your foreground exposure up. In that kind of scenario, you’re going to be looking for large changes in exposure, so the meter being ⅓ off your key meter won’t be an issue. If it changes 2 stops, it’ll still change 2 stops. 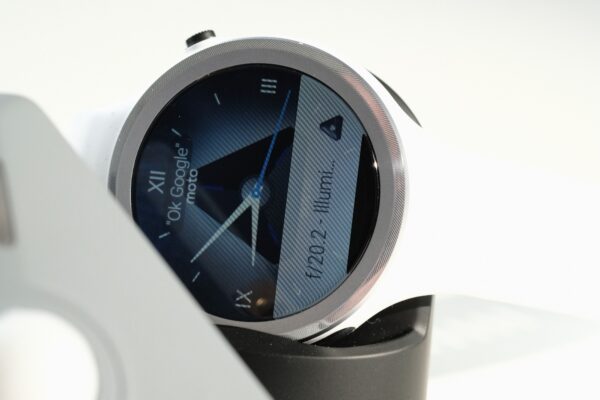 Hopefully, the final release unit will match up other meters perfectly, or will offer some version of software offset that will allow a user to say “always give me a reading ⅓ of a stop up” in order to match their Illluminati with another meter. In addition, our Sekonic hasn’t been to George at Quality Light Metric in a few years, so it’s potentially ⅓ of a stop off itself.

Color readings were a bit more unpredictable, but again, nothing wildly off for a pre-production unit. In this case we were comparing it to a Minolta Color Meter II from the 1970s, which might be old but has been very trustworthy.  Even having access to a color meter for under $300 is actually a huge bonus, since most modern color meters sell for more than $1000.  While the color temperature kelvin reading would sometimes vary a bit from what was expected, the chromaticity chart proved to be very useful and consistent. The mapping on that chromaticity chart proved especially beneficial when mapping out color for various lights sources (for instance tungsten vs. LED vs. fluorescents) and using gels to match them. Since the color of the two sources were different, different gels needed to be used to make them visually similar, and the chromaticity chart was a tool to help that process. Obviously, you’d be better off simply using matching sources, and your eye and monitor will be the final judge, but holding gels from the swatch book over the meter sphere would be a great way to get moving on a gel choice quickly. 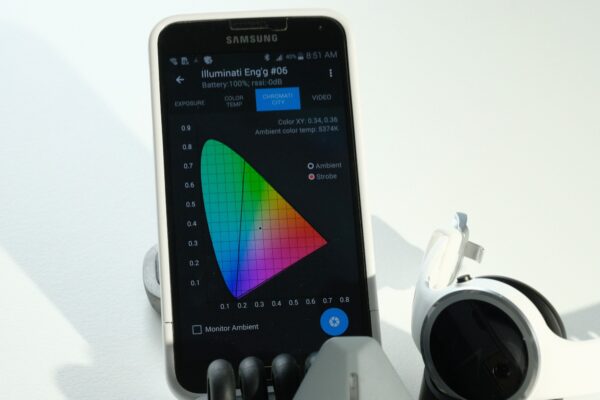 One particularly exciting aspect of the meter is the fact that it is app-driven, which allows for a lot of possibilities in the future. For instance, by tying the app from illuminati to the app from Hive Lighting, you could potentially do a day exterior shoot where your key light automatically adjusted its kelvin balance and brightness to match the background. Or you could sync it to a camera through an app like FoolControl to automatically adjust your daylight balance every time you hit record.

Since the meter is Bluetooth, its range is limited, and it would be complicated to set up some sort of Bluetooth repeater or hub, even if that were possible. The range in limitation won’t be a problem on a small set, but on a big day exterior when you might be wandering around hundreds of feet taking readings, you’ll lose connection quickly. As a Bluetooth tool, this really makes the most sense on small to medium stages and controlled outdoor shoots. However, when within range, the ability to have a meter on standby to alert you to changes is very useful.

While the Illiuminati isn’t likely to become your primary, single meter, it does make a great addition to your kit, for small productions all the way up to the biggest ones. Gathering more data, faster, without having to run around, is going to help you make better decisions on set, more quickly, and more precisely, and that is well worth the cost.

The Illuminati Kickstarter is already fully funded, and as they are imaging industry veterans with a working prototype, we feel confident that they’ll be able to deliver, so check out the Kickstarter now to lock in pre-release pricing.

About the Author: Illuminati Instrument Corp.